The History of Port

Port was developed in the early 1700s because of a trade agreement between England and Portugal.  England and France had been in a mercantile war that oftentimes broke into open warfare and of course, England is too far north to really grow and ripen grapes (though they’ve been exploring Sparkling wines of late).  Therefore, the English were looking for other places where they could possibly find wine, and one of those places was Portugal.  They concluded a treaty in 1703 that reduced the duties on English woolen goods, which would then be shipped to Portugal, and reduced the duty on Portuguese wine, which would then be brought back to England.

Well, this all sounded well and good except that the Portuguese wine didn’t taste the same as the French wine, and the English consumers didn’t accept it.  Therefore, the individuals who were involved in the trade had to come up with a new type of wine, and they were the ones who developed what we know today as Port.  They arrested fermentation when the wine was still quite sweet and added alcohol until the wine roughly reached 18% alcohol.

In the spirit of this tradition, our port style wine is made from 100% Chambourcin grapes from the 2015 harvest.   It has been aged in Bourbon Whiskey barrels from the A. Smith Bowman distillery for 38 months.  The wine is fortified shortly after fermentation with high alcohol grape brandy and is both unfiltered and unfined.  This wine shows an intense deep red color with orange hues from longer barrel aging.  On the palate, it is full of ripe red fruit flavors, rich dark chocolate, and a touch of bourbon leading to a long-lasting finish.  It is 6.3% residual sugar and 18.8% alcohol.

This port pairs well with both mild goat cheese as well as aromatic blue cheese. A fine cigar is also a worthy companion for this wine.

Vineyard Activity during the Depths of Winter

At this time of year we are frequently asked, what if anything is going on at Philip Carter Winery? While the production work has slowed following the conclusion of harvest, it is one of the most important times of year for our vineyard management program.

The main purpose of vineyard management is to achieve a maximum yield of fruit, at the desired quality level. One of the greatest influences on both yield and quality is winter pruning. Winter pruning involves the removal of up to 90% of the previous season’s vine growth. The overall goal of winter pruning is to prepare the vines for the upcoming growing season. This pruning helps to construct the location and general development of the canopy. A properly constructed canopy has great influence on overall grape yield, health, and development.

This highly influential pruning is normally conducted during the winter months, while the vines are dormant. In the fall, the vines begin moving complex minerals and nutrients via the vascular system from the leaves, down into the permanent wood (roots, trunk, and cordons). Pruning too early in the season can disrupt this nutrient transfer, leaving the vines deficient for the upcoming growing season. Pruning too late can sometimes lead to a delayed bud-break, which in turn can affect the entire growing season. In addition, pruning while the vines are dormant and absent of foliage allows for easier wood selection and cane tying.

The first round of winter pruning removes the majority of the cane (the previous season’s growth) to allow for a more precise bud selection at the final pruning pass.

Pruning removes buds, via cane removal, that would otherwise become new shoots and bear fruit the following season. By removing buds, growth is concentrated into the remaining buds, and eventually, canopy and fruit development. Before winter pruning, a single vine can have well over 100 buds. On average, a single vine is pruned down to 30-36 buds per vine.

Winter pruning should be seen as just the first step in a growing season towards achieving vine balance and optimum grape development. When properly pruned, shoot vigor can be controlled permitting the vine to fully ripen its fruit to the desired yield. Equally important to consistently ripening fruit from one year to the next is the overall long-term health of the vines.

At PCW, we have three distinct vineyard locations, Vineyards at Hume, Strother Family Vineyards in Delaplane, and Bigfoot Vineyards in Warrenton. Three unique vineyard sites across the northern Piedmont totaling 20 acres of vineyards.

Of our three locations, the Strother Family Vineyards offers one of the preeminent vineyard sites in the Mid-Atlantic region of the United States. Its southeast aspect and dramatic slopes are perfectly positioned at a 1,050’ altitude. The soils are a silty clay loam with a complex residuum mix of weathered granite and gneiss, and are classified by the U.S. Department of Agriculture as being of statewide importance. There is a sense of place to SFV and its terroir produces exceptionally delicate wines with beautiful minerality that are both expressive and reflective of the Piedmont of Virginia region. At this site, we grow Chardonnay, Cabernet Franc, and Petit Manseng.

Definitions
Buds – One or more embryonic shoots protected in a series of modified leaves called bud scales.
Bud Break – When buds begin to swell and grow.
Cane – The vine shoot from the period it matures and lignifies (turns brown and woody) until the end of the second year of growth.
Canopy – The foliage cover of the vine.
Compound-bud – The mature axillary bud that survives the winter; typically possessing three immature buds in differing states of development.
Cordon – An arm or trunk extension positioned horizontally or at an angle to the axis of the trunk.
Spur – A short cane possessing the desired bud count.
Trunk – The vertical wood stem of a vine up to the origin of the branches.
Vitis vinifera – The primary grape species cultivated and used as a source of wine, table grapes, and raisin grapes.
Yield – The fruit crop per area planted.

in awards and releases

The Strother Family has served as stewards of historic Valley View Farm for five generations and is proud to announce the recent partnership with Philip Carter Winery to open a wine and hard cider tasting room at the farm located in Delaplane, Virginia.

“We are thrilled to provide a complete destination experience for customers who appreciate locally produced products, who we refer to as, “Locavores”. Valley View Farm is considered one of the most spectacular landscapes in the northern Piedmont of Virginia. It is stunning. To be able to make this site available to Locavores to enjoy fine wine, Virginia ciders, pick-your-own fruits, and organically grown vegetables is nothing short of being able to create the perfect local farm fresh experience,” Philip Carter Strother, owner of Philip Carter Winery.

The farm is a 500-acre tract that is rich in history and, with one exception, has been in the same family for nearly three centuries. Located in the Crooked Run Valley in northern Fauquier County, the farm was patented in 1731 by James Ball of Lancaster County, a first cousin of Mary Washington, the mother of George Washington. Originally land of the Powhatan Indians, the Valley View tract was inherited in the early 18th century by Thomas, sixth Baron Fairfax. In the 1740s, it was first settled by several pioneer families that moved into the region, many of the original settlement structures built on the farm in the mid-1700s remain today.

In the mid-nineteenth century, Quaker pastor Henry Simpers purchased the property. He offered it as a stopover point for the Underground Railroad. During the Civil War, Simpers allowed armies from both sides to camp at the farm, including Stonewall Jackson’s troops who marched through on their way to the battle of Second Manassas.

Upon Simpers’ death in the 1920s, George Thomas Strother purchased the farm for his son Ed Strother who worked the property for sixty-one years, from 1926 to 1987. He bought and sold cattle, raised sheep and horses, and built a new manor house and red barn, which is the current location of the Locavore Farm Market today. Neighbor and famous general, George S. Patton, enjoyed foxhunting with Strother.

In 1997, Charles E. Strother, Jr. inherited the farm he had been helping his father run for the previous decade. Charles expanded the farm business, offering it as a retreat for day outings by business and religious groups. He also established a Pick-Your-Own attraction, formerly known as Virginia Perfection Orchard, featuring both pick-your-own fruits and vegetables.

In 2002, Valley View Farm inspired a two-year odyssey by internationally acclaimed artist Andrei Kushnir to document every aspect of this remarkably historic and beautifully serene portion of Fauquier County, Virginia. The culmination of Kushnir’s work, 50 landscape paintings were part of an exhibition at the Virginia Historical Society in 2004, Painted History: The Landscapes of Valley View Farm. The paintings, all created en plein air, depict one of the few family-owned farms in the Crooked Run Valley, just south of Sky Meadows State Park. According to the Virginia Historical Society’s Lora Robins Curator of Art, William Rasmussen, “the paintings underscore the idyllic nature of the area, as was apparent to Paul Mellon when he set aside the park acreage as a gift to the public.”

In 2016, Charles and his son, Philip Carter Strother, formed Strother Family Vineyards that currently operates a vineyard on 45 acres of the farm. Today, the story continues as father and son have collaborated once again in order to open the Locavore Farm Market & Tasting Room at Valley View Farm, in the red barn that Philip’s Grandfather built in the 1920s.

We invite you to come experience this historic property for yourself starting May 5, 2018.

Hume, VA–In the heart of Virginia’s Wine and Hunt Country, horse and wine enthusiasts alike will soon have something to cheer about. Starting this Memorial Day Weekend, patrons will be able to saddle up at Solaris Stable and ride horseback six (6) miles round trip to Philip Carter Winery where they can dismount at the winery to enjoy award winning wines while taking in the breathtaking views of the majestic Blue Ridge Mountains. Guests can also participate in a yoga session before the ride as an added option.

“We could not be more pleased with this partnership and the exceptional experience that it offers our mutual guests. It is unique and unlike anything available at any other Virginia winery. Solaris Stable provides the very best in equine instruction, and we are thrilled to pair our acclaimed Philip Carter Wine Experience with them to create a truly unique wine and hunt country destination for guests,” states Philip Carter Strother, owner of Philip Carter Winery.

Solaris Stable & Yoga Studio specializes in offering unique equestrian experiences. Wine Country Rides will enable patrons to enjoy the beauty of the northern Piedmont region from horseback and to taste wine made by one of the founding families of American wine. Philip Carter Winery boasts a picturesque vineyard and award-winning wines all located in the heart to Virginia wine and hunt country. This Memorial Day Weekend these exceptional experiences come together for the first time.

At Philip Carter, our history is wine. Our future is to promote a gracious way of living through wine, food & the arts. We invite you to escape with us up to Virginia’s wine and hunt country for a day of wine, horse riding and yoga. Cheers!

in awards and releases / News 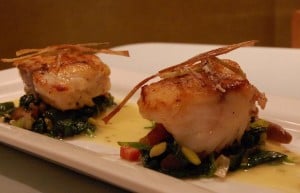 Monkfish in Tomato-Garlic Sauce
with the 2014 Shirley Chardonnay